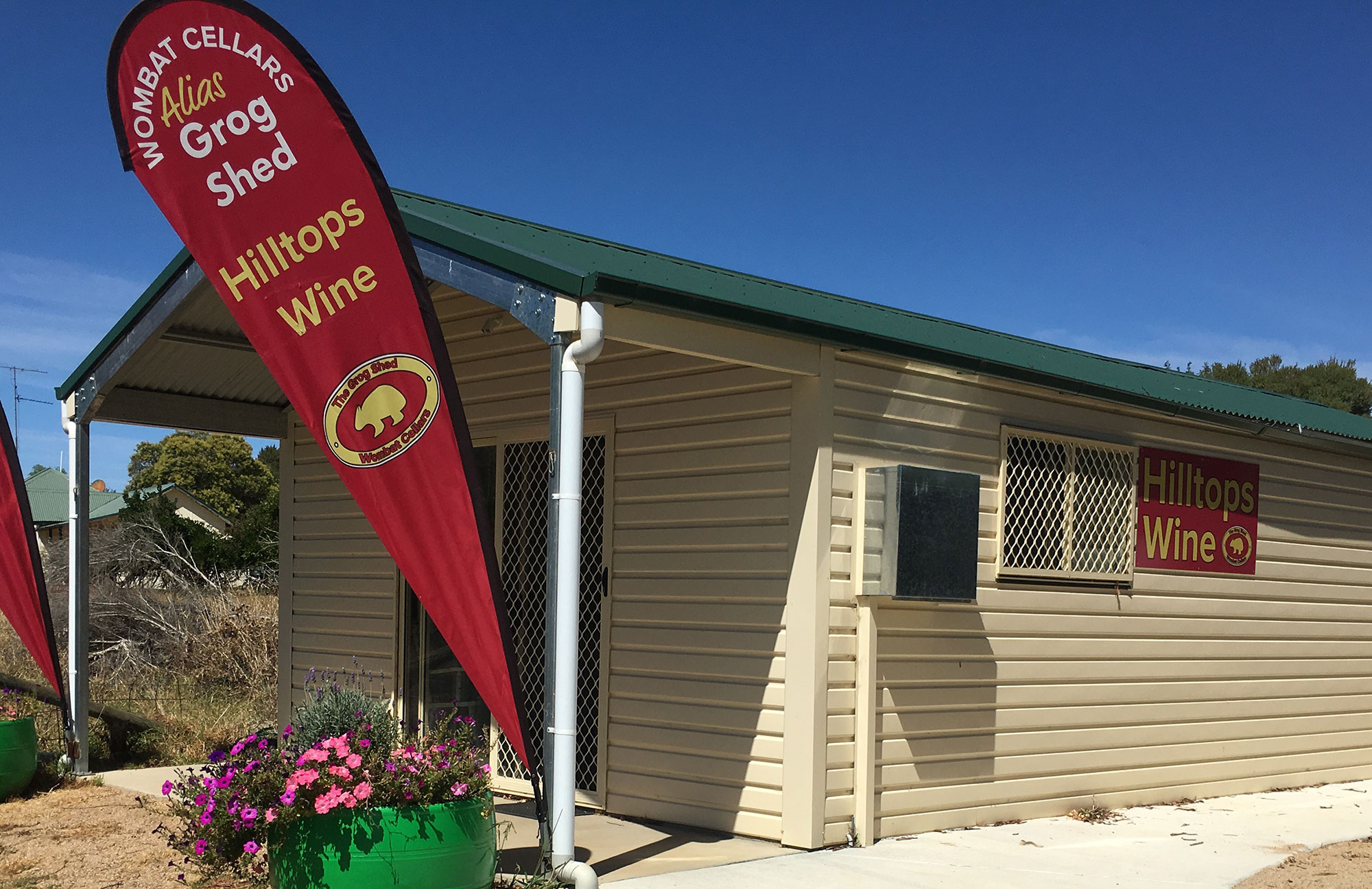 Wombat Cellars is situated in the heart of the historic village of Wombat, adjacent to the Wombat Hotel (get directions). The Harden road joins the Burley Griffin RD at Harden to the Olympic Highway at Wombat. Call in at Wombat and you can pick up a bottle of the Hilltops wines for dinner, explore the Wombat Second hand shop for treasures and relax in the unique atmosphere of the Wombat Pub; the longest continuous licensed hotel in NSW.

The Grog Shed Cherry wine has the distinction to be the first and only cherry wine exported to PNG and China. The Grog Shed products are now included in Wombat Cellars.

We also have a good selection of handmade produce and products from the local area where possible. This collection includes honey, jams, jewellery, art and craft.

Wombat Cellars, alias The Grog Shed, is a one stop location to purchase a bottle of one of the Hilltops wines.

At the moment, we have wines from four Hilltops vineyards and will be including other vineyards in the near future.

A renowned wine expert predicted that the Hilltops Wine region would produce the best wines in Australia, exemplified by the recent wins for the best Shiraz in Australia by Moppity Wines in 2014 And 2016, culminating in Moppity being one of the best ten vineyards in Australia, including best value for money.

About The Grog Shed

The Grog Shed grew out of Kerry Eastlake’s reluctance to pip more cherries for cherry jam in 2007 and she decided to make cherry wine. So, after a lot of explosions and much more reading The Grog Shed Cherry Wine was born.

The name The Grog Shed grew out of a conversation something like this:
Farmer: "What bloody shed do you mean???"
Wife: The Grog Shed!!!"

Wombat is a sleepy, historic village which was established during the 'gold mining days, in the 1860’s There was quite a lot of gold dug out of the creeks around Wombat and there was a large shipment of gold stolen by the bushrangers Ben Hall and Gilbert robbery near Eurogoa.

Eventually the miners were beaten by the underground water that seeped into their diggings as the water table is only about 20 feet under the ground. Young children are told not to jump in any little hollow as there is probably on old mine shaft that was covered in by a big piece of timber and then some soil just thrown on top. Over the last hundred and fifty or so years the timber has rotted and the shaft reappears. The odd farmer has been embarrassing stuck on his tractor with one wheel down the mine shaft. Even the council road workers on the Olympic Highway got caught out one Friday afternoon. They had just completed new road works and were finishing up for the day until they turned around to see a 20 ft trench right across the road...  an old miners shaft had fallen in!

This area is mostly undulating soft hills which are blessed with cooling breezes in the ripening period in order to keep the grapes at an even temperature. In fact, this area is a very diverse agricultural area, both in stock, horticulture and many different crops. Just south of Young, half way to Wombat you drive over the water shed hill which sees all the water on the Young side runoff into the Lachlan while the south side of this divide flows into the Murrumbidgee river.